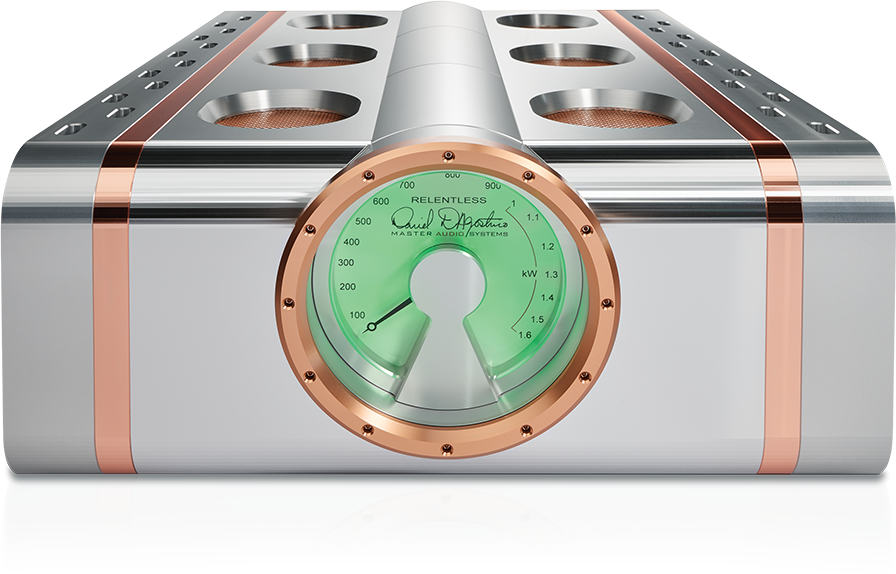 An Amplifier Born to Conquer, a Velvet Hammer

With its 5.5-kilowatt power supply feeding over 100 output devices, the Relentless Epic 1600 Mono  Amplifier easily delivers 1,600 watts into 8 ohms—and when connected to a 220-volt or greater AC mains outlet, it doubles its output to 3,200 watts into 4 ohms and 6,400 watts into 2 ohms.  This power output is maintained with the same musical composure at full power as it is at 1 watt. 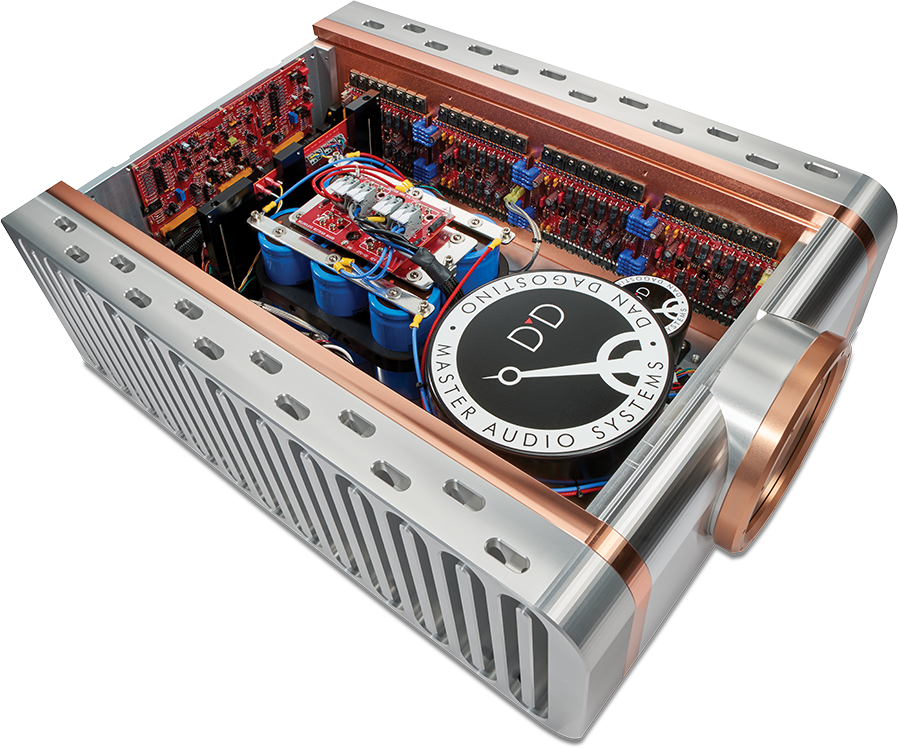 Crucial to the new circuit are the bipolar transistors powering the front end of the amplifier.  Activating the driver stage is a new bias stability circuit providing a nearly 50% increase in operating bias. Increasing Class A operation directly correlates to better sound quality. With this new circuit topology and the unique Copper/Aluminum heatsinks, thermal issues are irrelevant in the Relentless Epic 1600 amplifiers. The new bias scheme ensures bias consistency, preventing excessive temperatures even under the greatest demand. Additional regulation circuitry prevents any AC power anomalies from upsetting the amplifiers’ input circuitry. The core of the power supply is a 5.5 KVA linear transformer that uses multiple sections running in concert, potted and encased in a metal shield. This design reduces transformer noise to nearly zero and protects the audio circuitry from the transformer’s magnetic field. The transformer feeds a custom-designed rectifier circuit and a 600,000-microfarad/100-volt capacitor bank. A custom-made Delrin brace mechanically grounds each capacitor so they won’t vibrate. An additional electrostatic shield isolates the A slow-start circuit activates the power supply in stages, eliminating concerns about capacitive inrush tripping household circuit breakers. 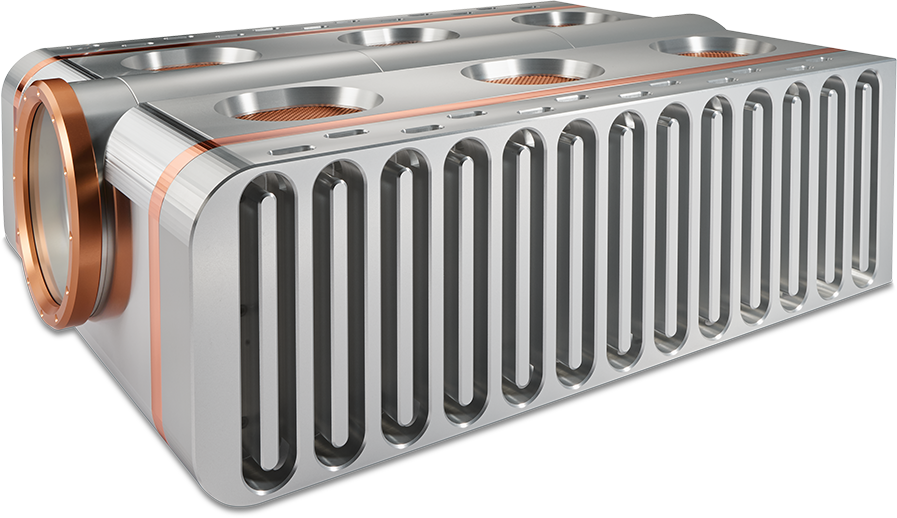 Ultimate Control for Any Loudspeaker

A critical element of any amplifier output topology is the driver section. In the new Relentless Epic 1600 amplifiers, the driver transistor has been upgraded to a new device that handles 33% more power per device. Additionally, the driver transistor count has doubled thus minimizing demand on each individual device and lowering overall amplifier output impedance without resorting to global negative feedback. Individual transistors are used for the positive and negative signal elements in an inter-digitated complementary arrangement. This nearly doubles the current drive necessary to maximize the enhanced output stage that follows. D’Agostino’s exclusive Super Rail concept makes maximum use of the incredible resources of this power supply. Super Rail employs higher voltage rails in the sections prior to the output stage, effectively “turbocharging” the amplifier.Every amplifier uses two voltage rails, a positive one and a negative one. Voltage rails support the delivery of power to the speaker. The music signal swings between these two rails but due to natural loss, the musical signal never reaches the output rails’ full capability. A Super Rail overcomes this limitation. The Super Rail employs higher voltage rails in the sections prior to the output stage. This voltage "boost" allows the musical signal to exploit the full capability of the output voltage rails. Extending the musical signal swing closer to the output rails maximizes the performance of the output circuitry design itself. This inspired technique improves dynamics, lowers distortion, and tightens the amplifier’s electrical grip on the speaker. The output stage features the same new transistor as in the driver section for sonic and technical consistency. Individual complementary pairs undergo our transistor matching protocol to ensure that gain linearity is virtually identical from 50mA to 5A. Additionally, every one of the 112 Relentless Epic 1600 output transistors used is measured and only devices that match the required performance specifications are included in the production of the Relentless Epic 1600 amplifiers. The high-output transistors used in the Relentless Epic are among the fastest available. These high-powered transistors mount with two stainless steel fasteners—a rarity among ﬂat-package transistors—for maximum thermal transfer to the copper heat sinks. A capacitor/resistor network connected to the base of each transistor guarantees stability even at high frequencies and with low-impedance speakers. 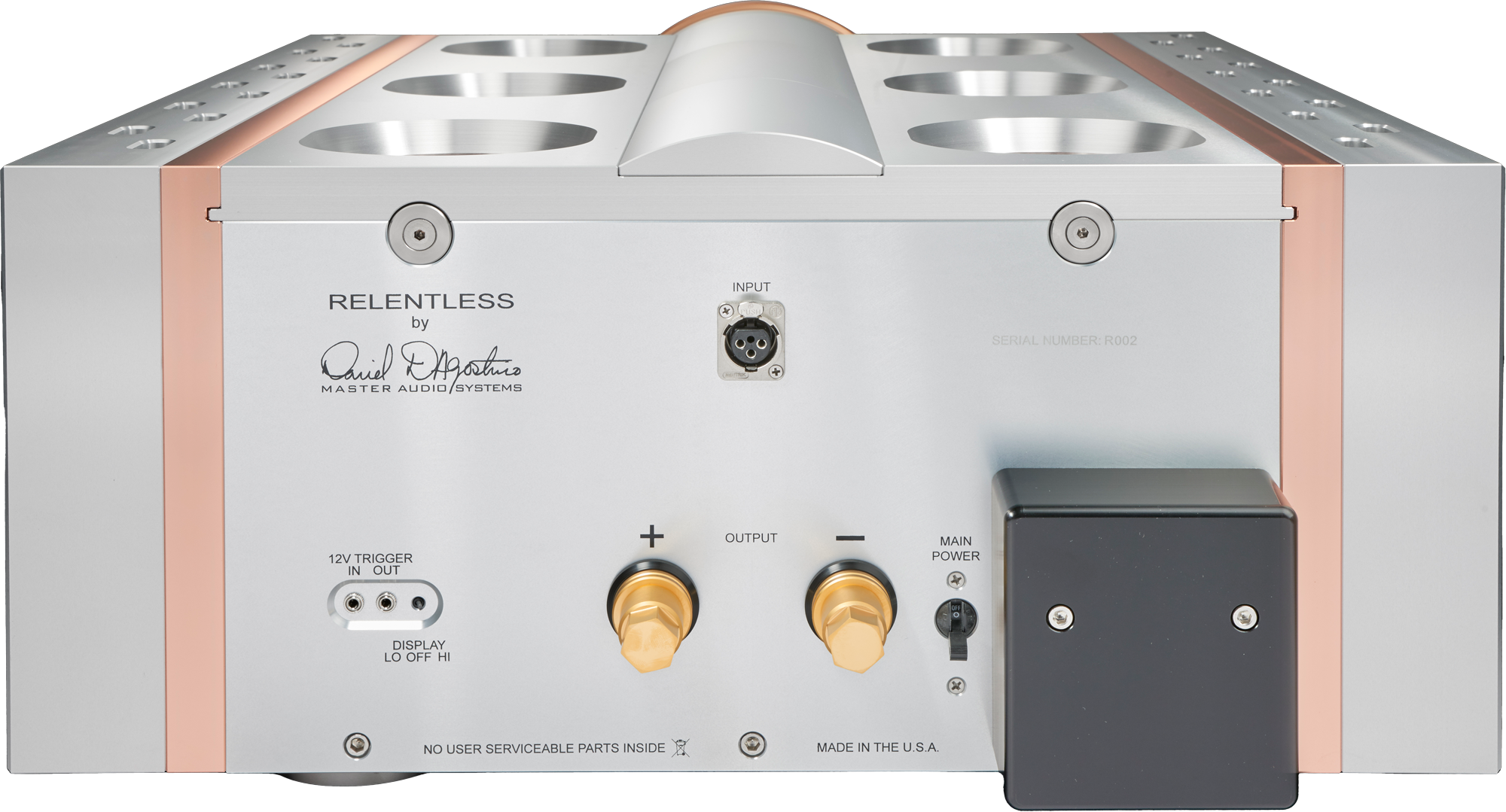 The Relentless Epic 1600 Mono Amplifier's power meter measures more than eight inches in diameter. The meter’s range and response automatically adjust to the level of the incoming signal, making it easy to read no matter how quiet or loud the musical passage. The Relentless Epic 1600 Mono Amplifiers’ unique heat sink combines copper and aluminum in a thermal engine that wicks away heat from the connected devices. The elaborate elliptical design expands on the venturi heat sink first explored in the Momentum series and makes certain that the Relentless Epic amplifiers run safely and reliably even when delivering its full rated power. Thermal, short circuit, and DC protection are included in a non-invasive but comprehensive defense against any external system faults. The entire chassis of the Relentless Epic and Epic 800 amplifiers are machined from solid aluminum, for superior shielding, thermal stability and vibration damping. High-precision milling allows the entire chassis to fit together solidly with no visible fasteners.

The entire chassis of the Relentless Epic 1600 Mono Amplifier is machined from solid aluminum, for superior shielding, thermal stability and vibration damping. High-precision milling allows the entire chassis to fit together solidly with no visible fasteners. A 1 µm-deep diamond cut finish with a synthetic enamel coating completes the aesthetic.

In keeping with the tradition begun with the Dan D’Agostino Audio Systems Momentum amplifiers, the Relentless Mono Amplifier offers a single XLR balanced input. Speaker connections are made using massive custom made binding posts made from gold-plated brass. A special tool is included for tightening speaker cable connections without damaging the terminals themselves. The new Relentless Epic 1600 Mono Amplifier uses the same chassis as the original Relentless Amplifier. Every Relentless Amplifier can be upgraded to the Relentless Epic level. All electrical enhancements are included in the upgrade while the original metalwork is retained.

Just as no audio designer has been more relentless than Dan D’Agostino in his pursuit of perfection, we think it safe to say that no power amplifier has been designed and built to a higher standard than the Relentless Mono Amplifier. 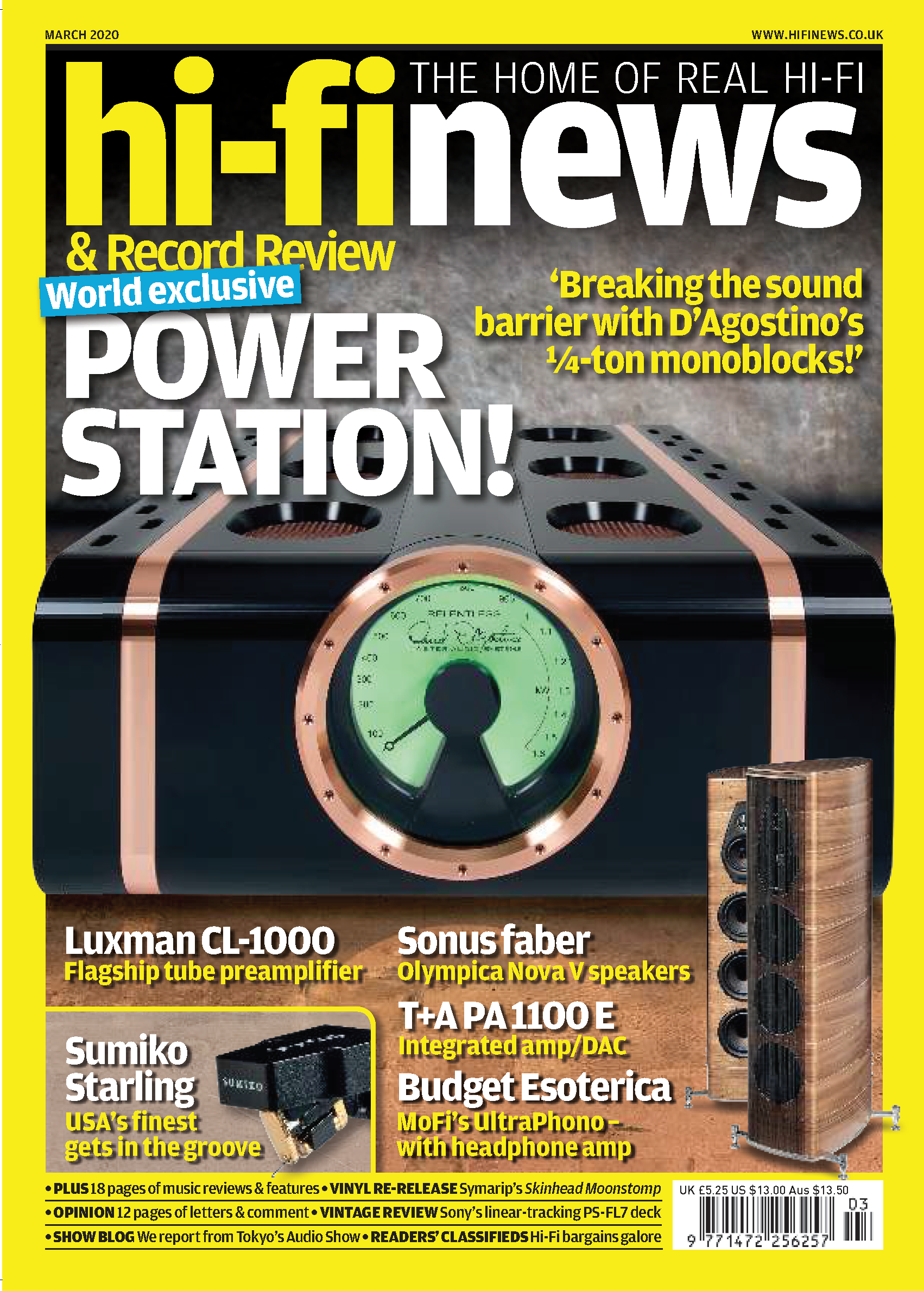 "...And that sense of latent power that hangs over every piece of music is so palpable that I'd hesitate to define its dynamic envelope, its untapped reserve, as merely 'unburstable'."